No filming this week

I don’t feel that well though I don’t think it’s CoVid, but whatever it’s going to be no vid from me this week. I had the timetable for the bus to get to my next destination, and a list of things to see, and the possibility that now is the best time to go there because it’s a very touristy town and why not go in the off season? It’s a shame because not only am I emotionally invested in making short films and putting them on YT I have also just bought myself a copy of VideoPad to replace Animotica as my editor of choice.

Animotica has served me well for months but it has limitations, not least being vague and it’s hard to keep track of items in a longer project or more accurately one with a larger number of clips (you could have one hour-long take, that would be easy. 50 clips making up a 20-minute film, less so). I went for the pro version of VideoPad not least because it allows three audio tracks, which may sound like a lot but when you consider the first track is the video clips’ audio, and the second will be background music, what happens when you want to drop in, say, a sound effect of a train going past or of birdsong? If you’re limited to two audio tracks then you can’t. To look at the reviews VideoPad is level pegging with Animotica but it has a more traditional desktop (Animotica more resembles Windows’ Video Editor). We shall see.

So given other things I have to do, it looks like – health permitting – it’s filming next Wednesday. And as even ‘tomorrow, go into town with the camera’ is a filming schedule, then I have a schedule.

Guildford – A Charming and Underrated Town

Last week I went to Guildford, Surrey, to visit family. A bit out of my usual area but I did make a short video, and here it is. For some reason I can’t find how to put a video link in a frame on the page though I’ve done it before, so there’s just a link to YT here.

Guildford – A Charming and Underrated Town

The Bridge Cafe is on precisely that: a section of the Regent Arcade that joins it to Cavendish House across Regent Street with its theatre and its cafes and pubs. Right in the centre of town, this is; I don’t know what the official Centre of Town is (top of the Promenade perhaps?) but it can’t be far from here. 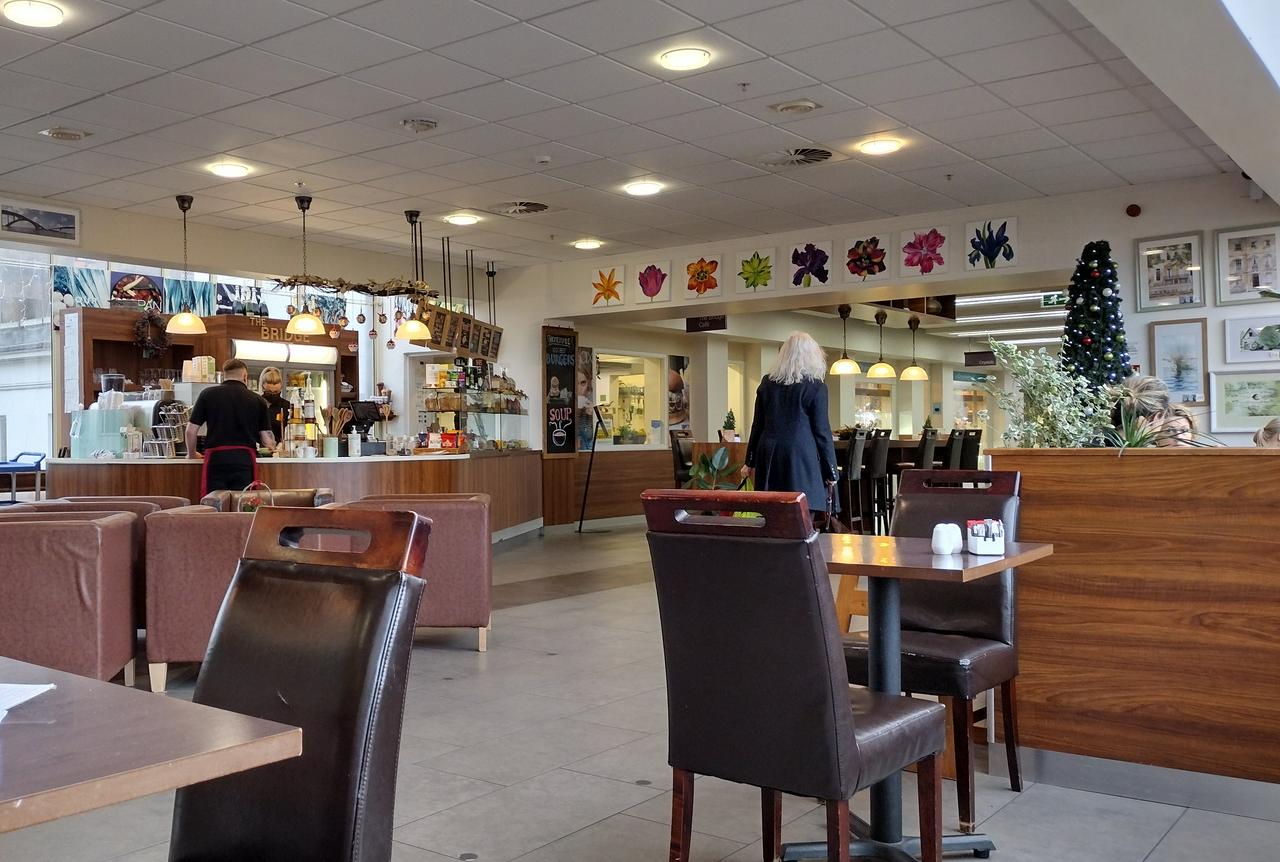 The Bridge Cafe is accessed via the department store in Cavendish House or via the Arcade. I recall that many years ago I was sent to sell cupcakes on a bridge in the Bullring in Birmingham – among the stranger jobs I’ve had (although it was part of my work as a Housing Admin).

The Cafe has a cheerful aspect – there is nothing forbidding about this place, it is down-to-earth to a fault and the fault is that you might expect it to be not all that good. However it is quite adequate with a possible exception we shall come to later. The menu shows breakfasts and brunches and sandwiches and cakes and lunches. I go for a bacon and egg bap and why not, and a coffee. It arrives quickly – service is cheerful, polite and efficient.

Bap is good. Decided to eat with a knife and fork – has the advent of smartphones meant less hand-eating of sticky foodstuffs? It may have – which was advisable as the bacon needed to be cut or it would all come out in one go. On the other hand some places stuff their cheese sandwiches full of grated cheese, but not here, I expect. 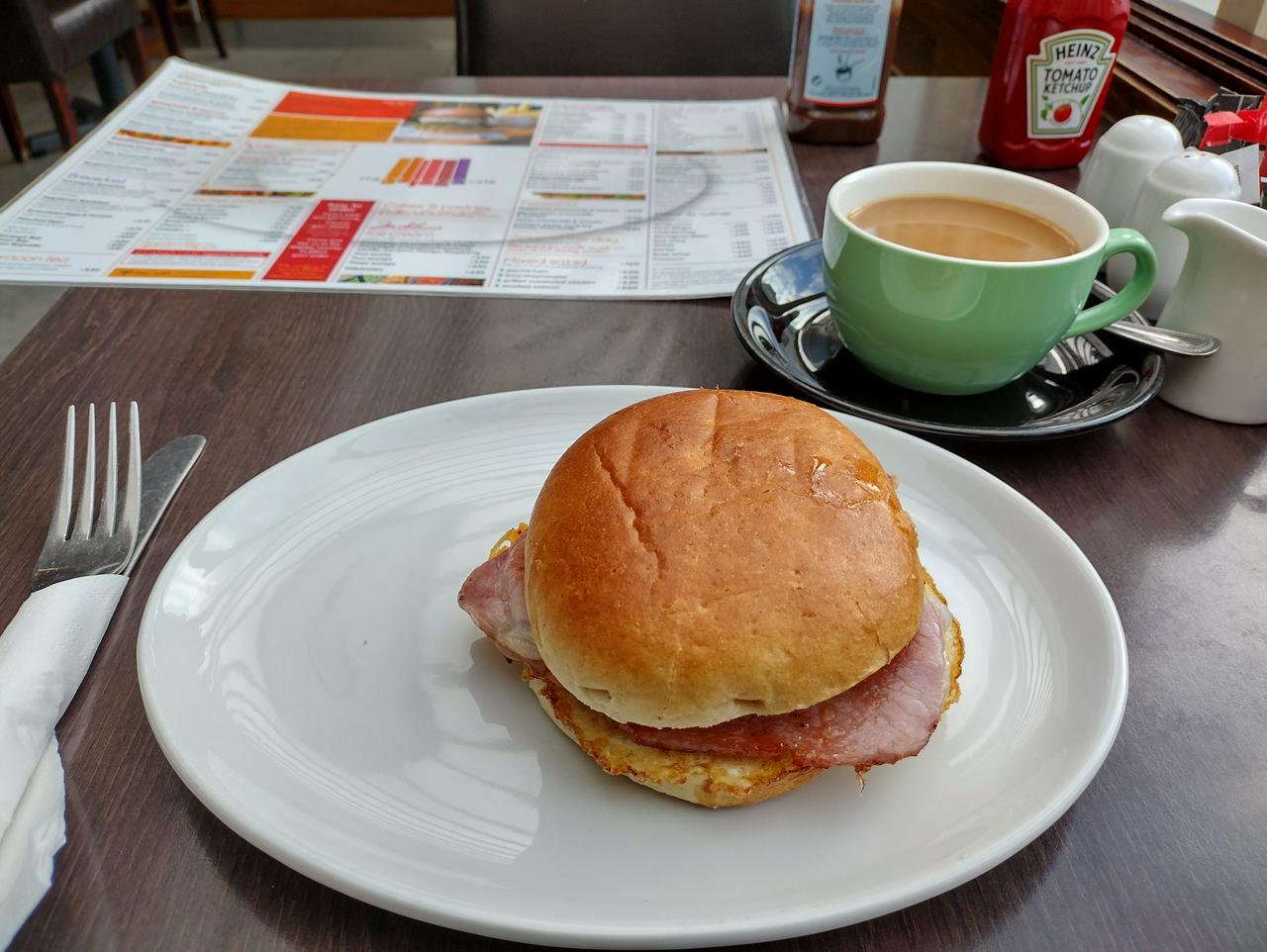 The caveat was the coffee. Really quite watery was my Americano and I looked out of the window longingly at a cafe I could see in the street below, thought, shall I go in there afterwards, but I didn’t.

Decor is fine, seats comfortable, some artwork on the walls that may have been for sale, I didn’t check though I went through into the Regent Arcade afterwards. 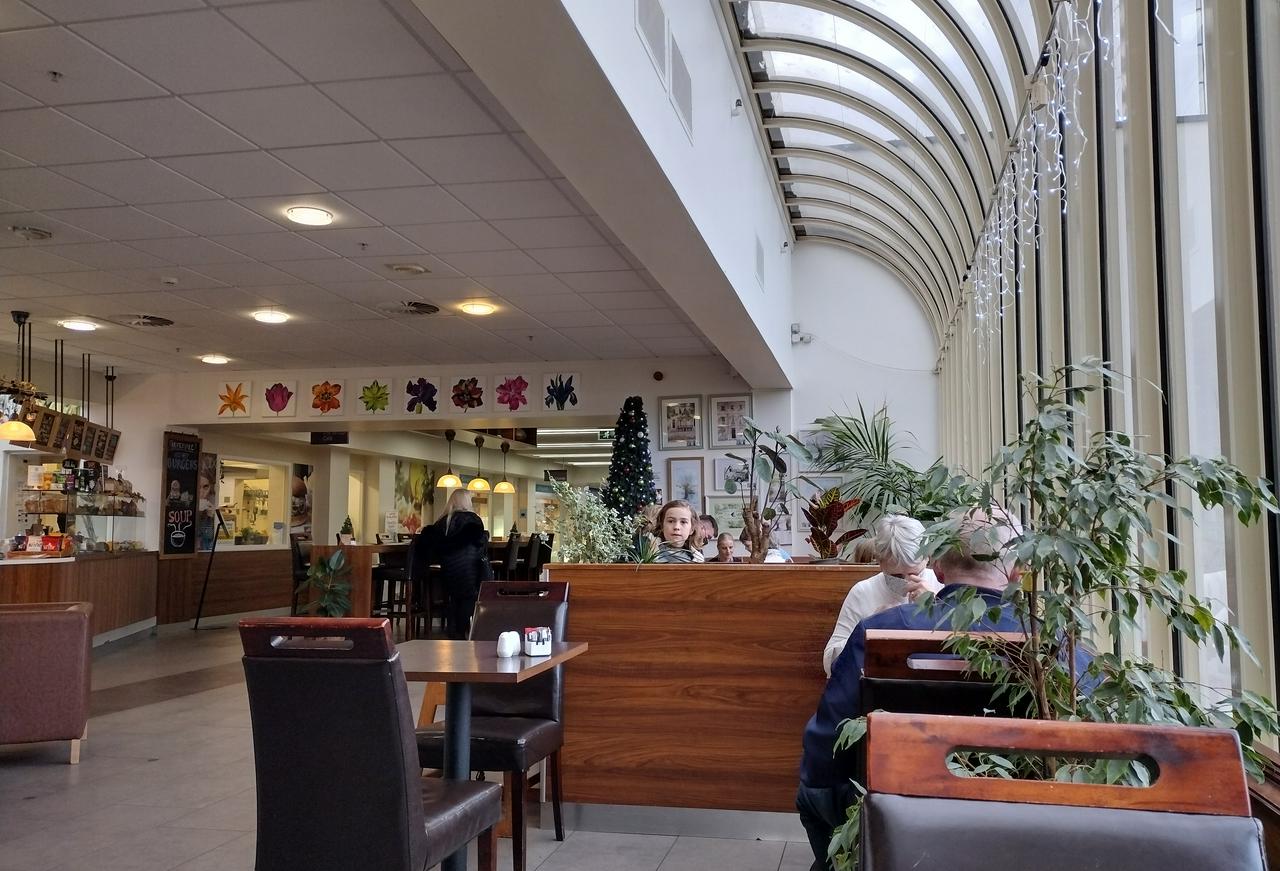 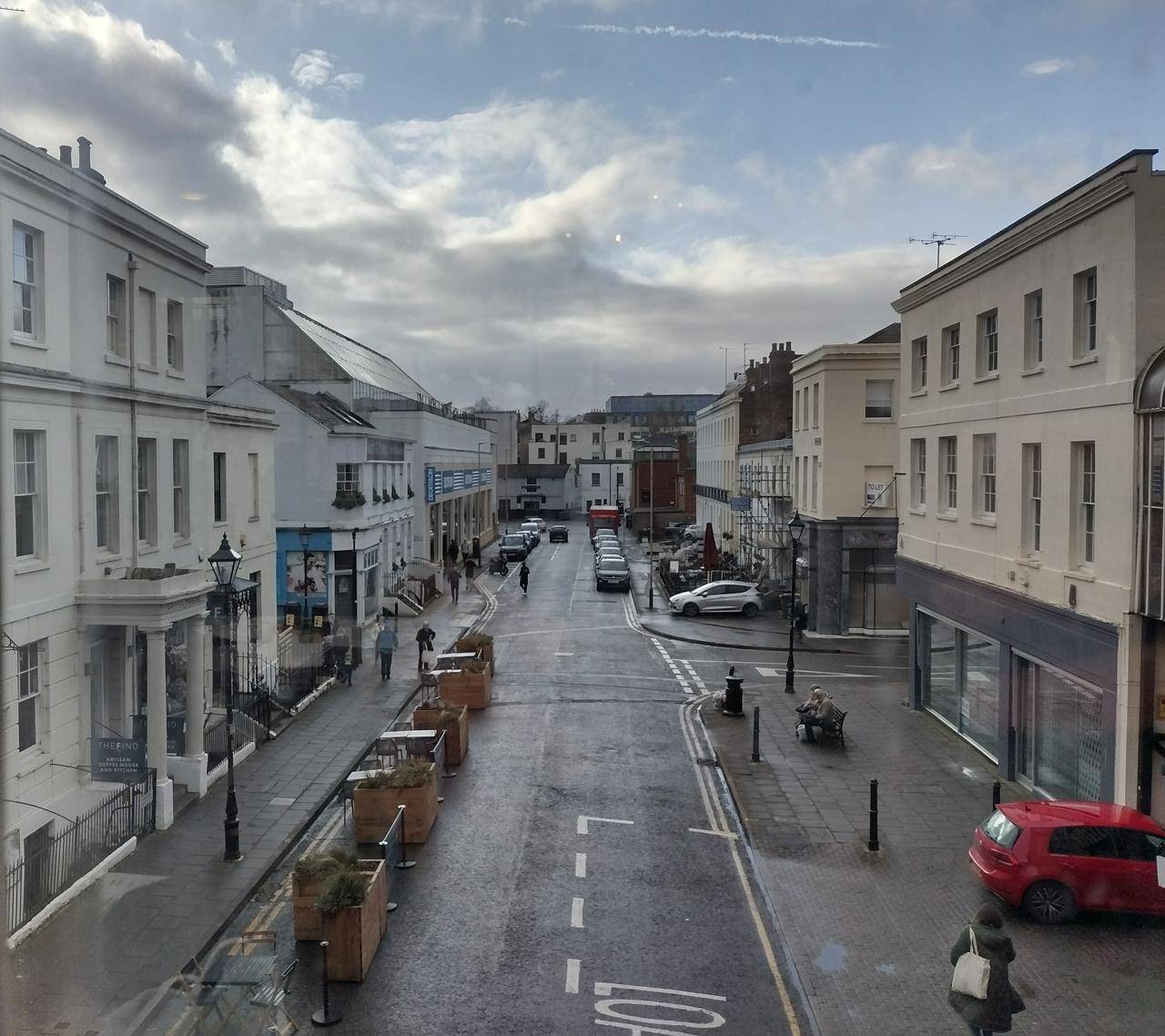 Would I return? Yes, though as I say the coffee needs to be improved.

And yet another video

And yet another video

This time I went to Westbury, in Wiltshire, or ‘Westbury-under-the-Plain’ as it is sometimes known, a Hardyesque name to allude to its site at the edge of Salisbury Plain. There is a White Horse carved into the hill but I only glimpsed it from the train arriving.

A misty coming we had of it – mist hanging over a village station so that I thought of turning back at Bath and going for a coffee and going home, but in the end I persevered and found myself a mile from Westbury (the station is that far because of the route of the line, although as it was originally the terminus, extended later, I wonder).

Westbury itself is compact, and 19th century largely, a wool town, made from the weaving of wool, and I seem to be drawn to such places like Lyon (silk weavers in its case), and Stroud. Once it was a thriving industrial metropolis, a kind of Bradford of the south, and now it is a drowsing town woken only by the thunder of lorries along the road to the west side of the town, as the long-asked-for bypass has yet to be built. The town has a 19th century swimming pool, one of few of such vintage still in use. And a clustering of pubs most of which are still in use, and a church. Its population is less than 20,000, but it is a town below the plain and it holds its ownness dear.

So I have made yet another video, this time of the area of Fairview in Cheltenham. Had to go back this morning because I wanted to film the church as well and hadn’t done so on the first pass – which included going up a hill to get some good views.

This film is inspired by the short novel “L’Ecume des Jours” (“The Froth of Days”) by Boris Vian (1920-59), in which, according to its author, “A man and a woman love each other, and then she dies. ” However, it is a completely surreal story, where water lilies grow in lungs, and a house shrinks as its inhabitant becomes poor.

And there is always the jazz, necessary in Vian but which is lacking in several films where it is should be. Also as oddly modified Peugeot cars, like a transparent limousine – which is in the novel, when Colin and Chloe go on honeymoon – and conforms to the style of the text with its mechanical-biological chimeras – by example a “modified rabbit… you keep whatever function you want.” Vian was an engineer as well as a novelist and jazz musician.

The impulsive style of the first part of the film won't appeal to everyone, but it suitable for the journey that we the public take at the same time as the characters of the story – that their world is ideal only for a few well-to-do young people at the top – the ‘Froth’ of the original title, perhaps, and it turns out to be pretty dystopian otherwise.

When Colin has to find a job to pay Chloe's medical bills he finds himself in a world deprived and full of misery. It's a world full of religion – like the France of the 1940s and 1950s when the novel appeared – and the religious are mostly followers of a strange and apparently harmful morality, a world where as in “L’Arrache-Coeur” – another novel by Vian, published in 1953 – “God is luxury. “

Gondry’s film is the third time the novel has been adapted for the screen – the first film being the well-known 1968 version by Charles Belmont – Marie-France Pisier and Jacques Perrin in the roles of Chloé and Colin – and then in 2001 the Japanese Go Riju made “Chloé” with Nagase Masatoshi and Tomosaka Rie.

I found that Gondry brought the strange and overwhelming atmosphere of Vian's world to life. Although the characters are not deep – maybe this is on purpose – the world they inhabit comes true: which results in a stylized film and little to the taste of a large part of the audience, but faithful to its origins. .

Great Malvern – the only way is Up (unless it's Down)

Yes, I am back making videos, having been off for a few weeks. So this week’s visit was to the town of Great Malvern, at the foot of the Malvern Hills in the West Midlands of England. I’ve been there before but apart from having had a huge cooked breakfast (the previous time) and also falling off my bike (ditto) my main memory of it was how hilly it is. I wasn’t wrong. Nice though. And known as well as being an outdoor centre, also having been home and inspiration to composer Edward Elgar. Here’s the video: 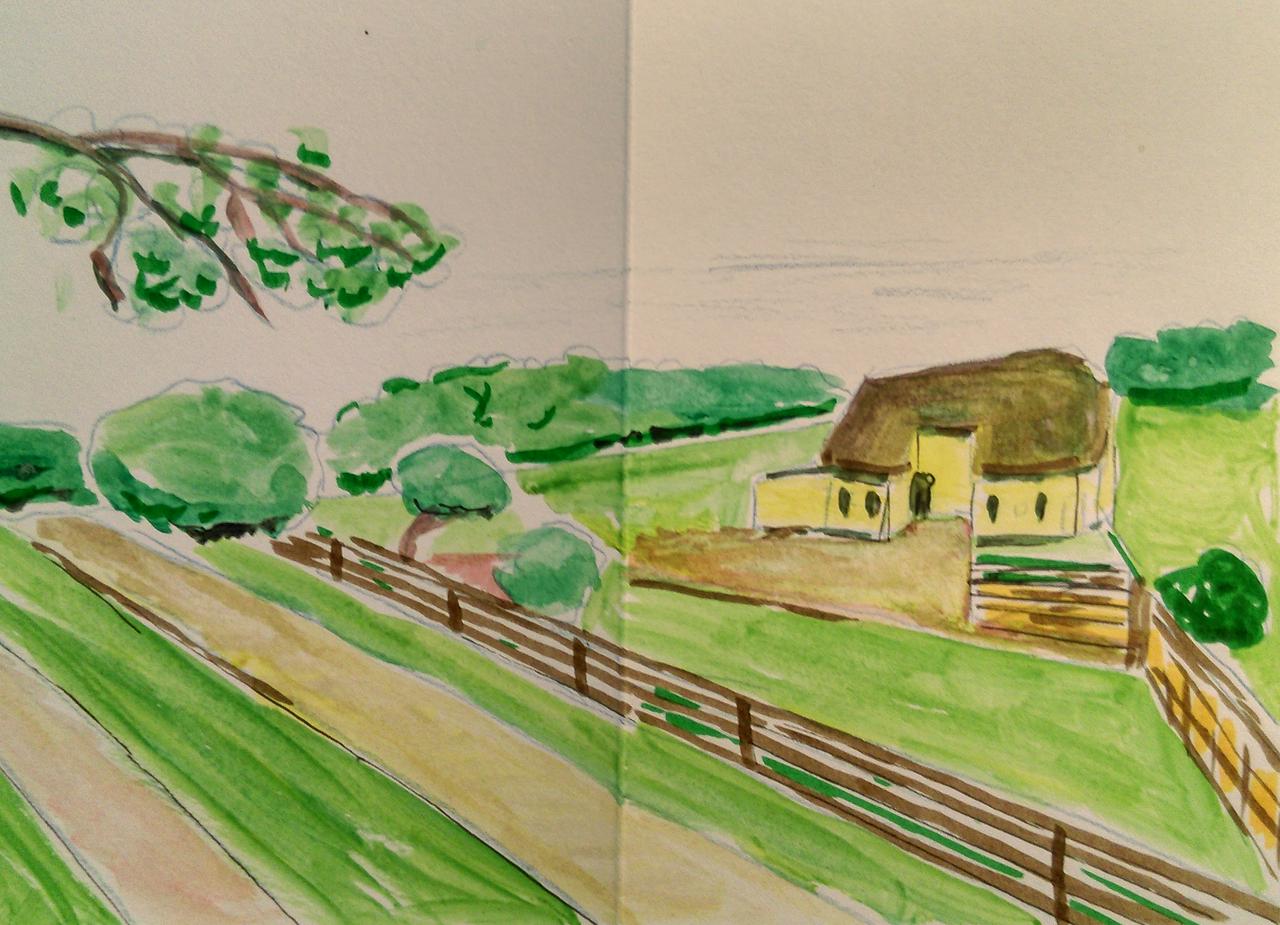 A small watercolour for my friend’s birthday card. The fold is because it takes up both the front and back of the card. The village of Bedham is a special place for him.

Moving from the Old Site

Yes, it's the second coming of the blog, for those tired of creaky websites and also of social media. Today I registered solitaryreview.com and .co.uk, and they point to the write.as blog.

My old website is now defunct. Newer cafe reviews and a couple of other pieces have been uploaded – the older cafe reviews are now on Flickr. As to the rest, it also exists on my PC and in the Cloud and is no longer needed online. It’s a shame in a way as there’s nothing ‘wrong’ with Typepad as such: it’s straightforward to use (rather what Wordpress was ten years ago when I was using it more), but when a company won’t even allow new sign-ups and directs prospective users to a sister company using a rival technology, then it is probably time to call it a day. (tl;dr: even Typepad’s owners want you to use Wordpress). And I also don’t need the huge number of pages and posts on there to still be online.

This Dutch-influenced cafe, tucked away down a side street near Bath Road, with its friendly orange decor and a bike in the window, was one I wanted to try. Pleased I did. Parked my own bike outside and went in for pancakes with bacon and maple syrup – which were just right – and coffee which was also good. Sat outside which was nice. I would certainly return. 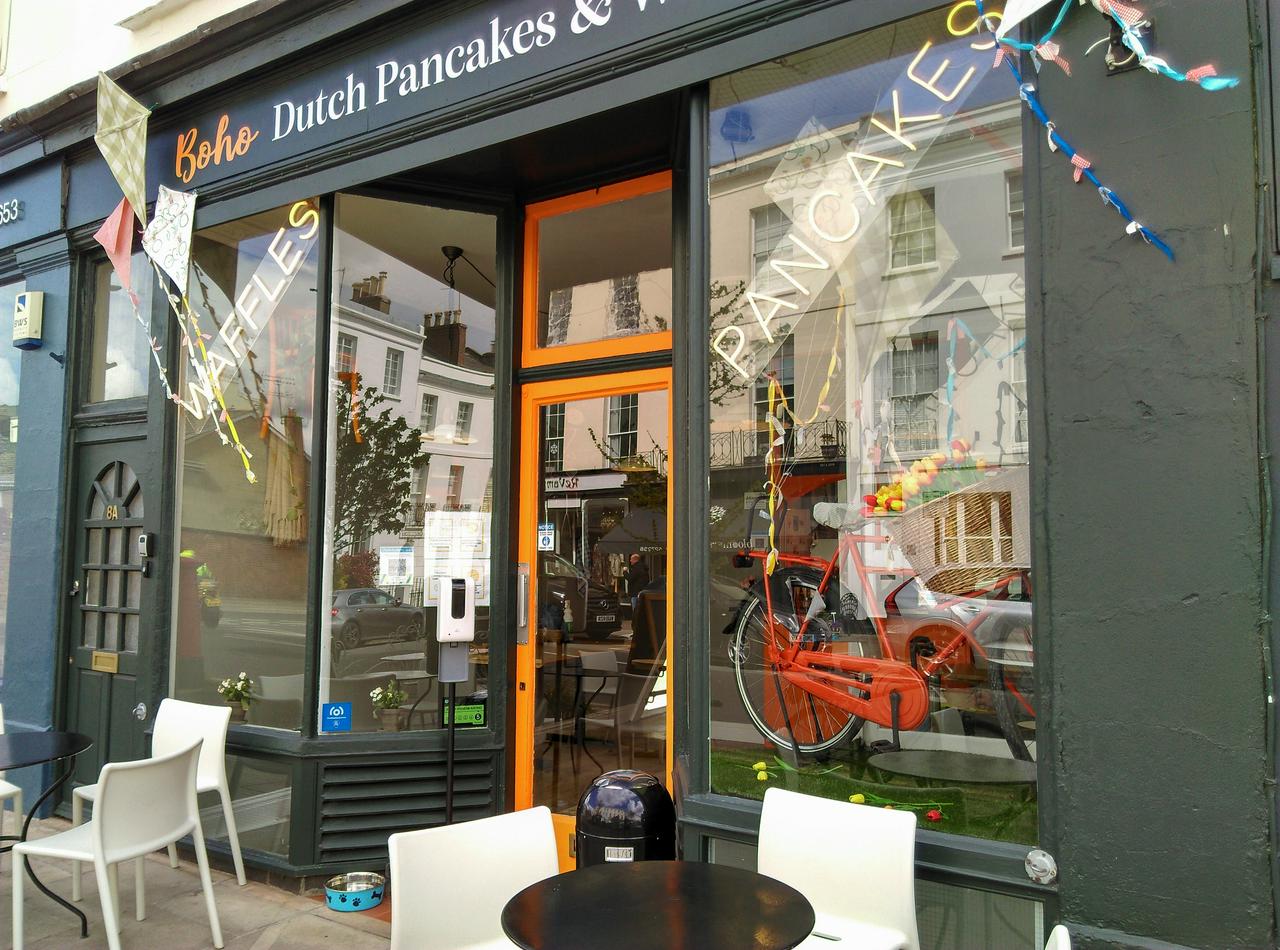